From Tuesday 22 November, Large Bull, Sorel Etrog’s (1933-2014) impressive bronze sculpture from the Jean et Suzanne Planque Collection, will be installed in the patio of the Musée Granet, Place Saint-Jean de Malte. It belongs to a series of works on this theme which the artist executed at the end of the 1960s.Having heard of Jean Planque’s enthusiasm for certain of his works—barely a few months before the collector died in a car crash—Sorel Etrog wished to honor Jean Planque’s memory by presenting his Foundation with a few pieces.

Thus as early as 2007 several drawings and sculptures entered the ensemble assembled by the Swiss collector and are regularly displayed in the Chapelle des Pénitents Blancs at the Musée Granet XXe.

From 31 March to 31 August 2023, an exhibition at the Chapelle des Pénitents Blancs will offer a wide-ranging survey of the theme of the “Link,” a central topic in the work of this artist who sought throughout his oeuvre to gather together the pieces of a unity smashed in his early childhood during the pogroms perpetrated by the Nazis at Lași (Romania) in the Second World War, which his community and family were the victims of. 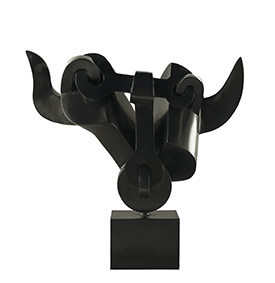 The first one, Le Canal d’Hiver, has been realised when the painter went to Saint Petersburg during the winter 1913. It represents the canal between the Moika and the Neva, with the Hermitage’s bridge in second plan.

The second one, Composition avec figures, 1926, evoks some nudes in a naturalist landscape with intense colors and lots of mistery.

These two paintings are shown since mid-July in the Chapel of the Pénitents blancs. 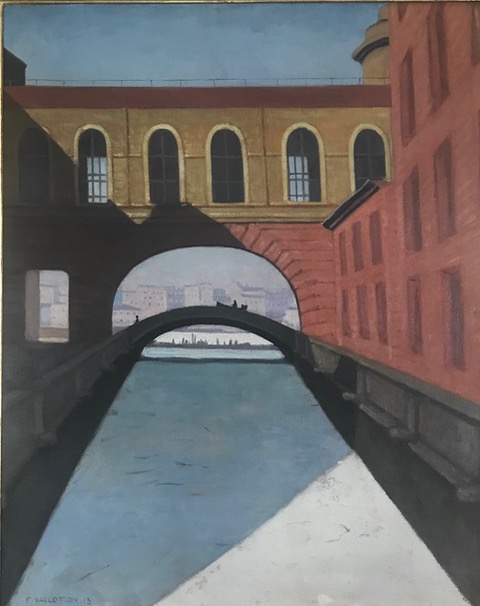 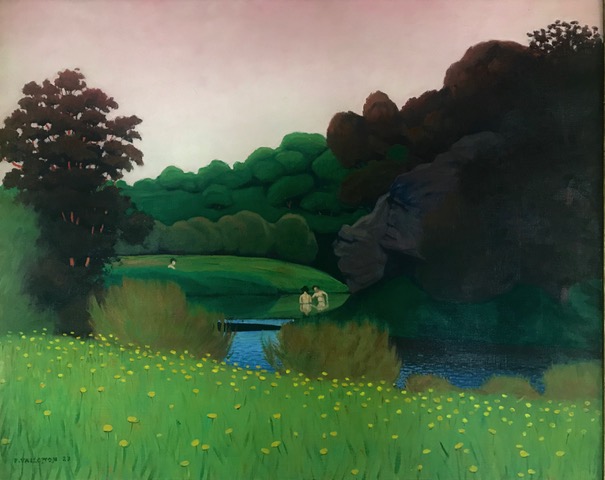 The Chapelle of the Pénitents in Aix-en-Provence will open soon. We have restored the exhibition spaces and presented artworks by Kosta Alex in the second floor. Some of them are shown for the first time and have been donated by the artist’s widow. It is the case of the big sculpture Head, 1960, inspired by the monumental statues of the Pâques island. 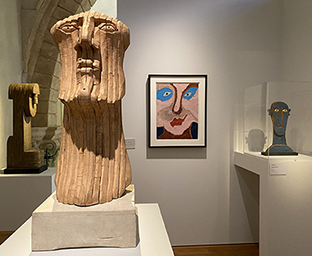 Kosta Alex, presentation on the second floor of the Chapelle, spring 2021 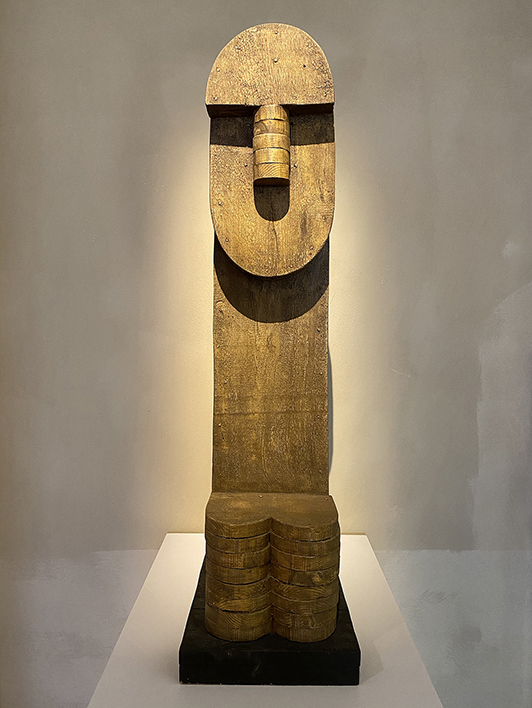 Painter, drawner, sculptor, engraver, ceramist, poet and photographer, Francisco Toledo was an artist engaged on all fronts. Prolific, he facilitated the cultural life of his native town, Oaxaca in Mexico, where he opened museums and studios. In 1960, he came to Paris in order to complete his studies, and his work is exhibited for the first time at the Flinker Gallery. That’s where Jean Planque discovered the work of this unknown artist of 20 years old.

Immediately fascinated by the universe of this artist, Planque bought several of his art pieces. The Swiss is seduced by this painting deeply attached to the earth values and, at the same time, full of strange figures that came from a shamanic world. This presentation in the Chapelle is a tribute to this great artist, just passed away.

On the second floor of the Chapelle, you can also discover some art pieces from Alexandre Hollan, recently donated by the artist to the Foundation Jean et Suzanne Planque. 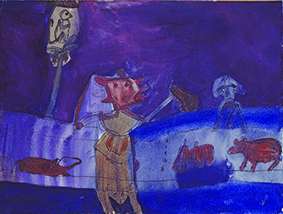 Figures and animals in the night, around 1965

After the Granet Museum, Aix-en-Provence, and the Kunstmuseum Pablo Picasso, Münster, the exhibition “Traverser la lumière” will be presented at the Piscine, Roubaix, from October the 19th of 2019 to February the 2d of 2020.

For this third stage, the corpus has been extended with loans from several Museum, in particular from Orsay Museum and Centre Pompidou, Paris.

A little exhibition about the Hem Chapel will be presented as well in the permanent collection spaces.

If you come to visite the exhibition, don’t miss the Hem Chapel, important place of the sacred art revival. In a building from Hermann Baur, Alfred Manessier has realized there remarquable stained glaces. A tapestry of the Sainte face from Rouault can be seen there as well.

The Swiss television has made an interesting report that you can see here.

South wall of the Hem Chapel, consacrée in 1958

Jean Planque bought this painting at the Leiris Gallery – designed by Charlotte Perriand in 1989 – shortly after the death of his wife Suzanne: this late addition to his collection could be considered as a tribute to their couple.

Purchaser for the Beyeler Gallery in Basel from 1954 to 1972, Planque had close relations with the Leiris Gallery. Thanks to that great confidence the Leiris Gallery had with Planque, Beyeler was able to purchase in 1965 twenty paintings directly from Picasso that still remained faithful to his Parisian merchant. The day of this sale, Picasso explained to Beyeler, showing Planque: “You know, if I do that, it’s because I like him! ” 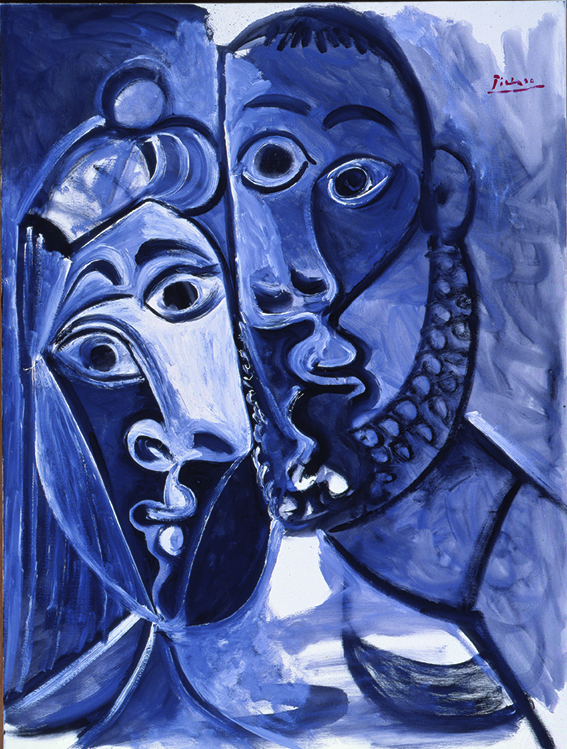 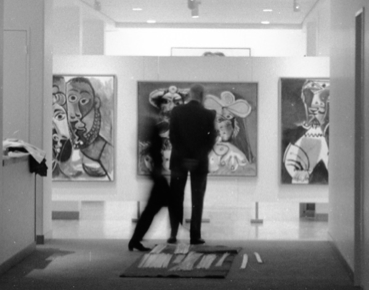 The association LES AMIS DE JEAN PLANQUE has just been created in Basel by some critics, collectors and art lovers from Switzerland.

Its goal is to help the acknowledgment of the Jean Planque’s work in the art world of his time, and in particular with the Ernst Beyeler Gallery from Basel.

The association wants to organize events around the Planque collection and to help the realization of the Jean and Suzanne Planque Foundation’s projects. 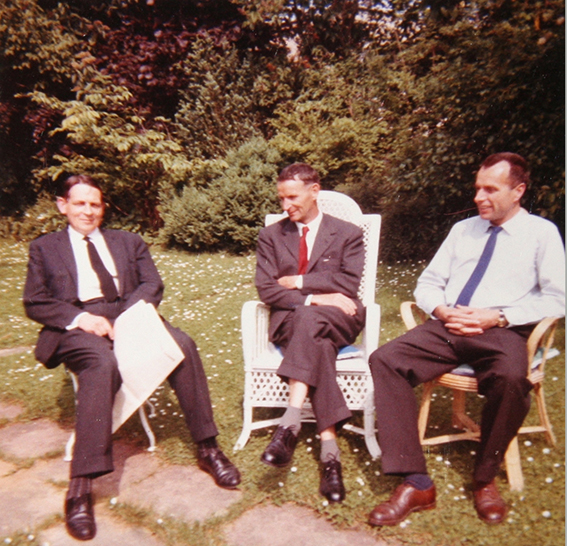 Jean Planque, at the beginning of the sixties, between Ernst Beyeler (on the right on this picture) and the pastor Paul Hassler, in the garden of this one in Basel.

The second venue of the exhibition “Traverser la lumière” will be hold from the 11th of May to the 29th of September 2019 in the Kunstmuseum Picasso Münster, Germany.

Alfred Manessier, one of the artists that we present in the exhibition, has realised several stained glass in the area. One of these realizations, in the church Unser Lieben Frauen in Bremen, is remarquable. 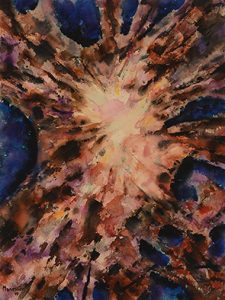 The travelling exhibition “Traverser la lumière” (The Passage of Light) is now open.

It defends the cause of a closely-knit group of French painters who, in the years immediately succeeding World War Two, preferred to have their works referred to as “non-figurative” rather than as “abstract.” They chose this name in opposition to the work of the masters of pure abstraction in the line of Kandinsky and Mondrian, as well as to the paintings of American “Abstract Expressionists” (Jackson Pollock, Willem de Kooning and others), whose canvases were sweeping Europe at the time. In addition to Roger Bissière, their oldest representative and in a sense their master, the “non-figurative” current included Jean Bazaine, Elvire Jan, Jean le Moal, Alfred Manessier and Gustave Singier.

Notwithstanding the support of a number of writers, collectors, critics and leading galleries like the Galerie Drouin, the Galerie de France, the Galerie Jeanne Bucher and the Galerie Maeght in Paris, their current has been unjustly neglected, especially from the 1970s on. The time seems ripe for reaffirming their importance.

It was in 1952 that Jean Planque, then still under Cézanne’s sway, discovered Alfred Manessier’s painting at the Galerie de France, a revelation that made a deep impression on him and marked a turn in his approach to modern art. “In front of those paintings I suddenly had an intuition of truth, of a non-figurative art capable of expressing things better and more strongly than figurative art,” he wrote in his journal in 1972.

Along with paintings by Bissière selected by Jean Planque, the core of the exhibition comprise approximately 100 works assembled by a Swiss collector, plus loans by several major museums. It runs at the Musée Granet (where the Planque Foundation is installed) in Aix-en-Provence from 9 November 2018 to 31 March 2019. It will then move to the Kunstmuseum Pablo Picasso in Münster, Germany (11 May-29 September 2019) and the city museum of La Piscine in Roubaix, France (18 October 1919-2 February 2020). 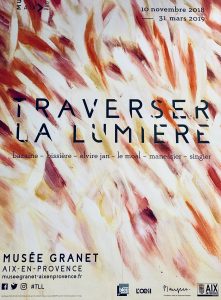 Poster of the exhibition 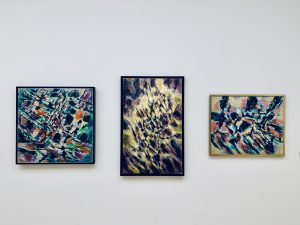 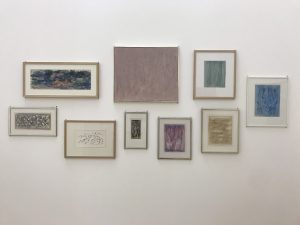 Works presented in the exhibition 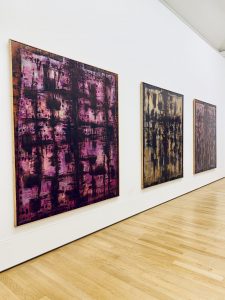