In 1942, at the Lausanne flea market, having happened on an unsigned canvas he believed was by René Auberjonois, Planque plucked up his courage to knock on the painter’s door and ask him if he was right. After a pause that seemed interminable to the youthful collector, the bearish artist replied, “Yes, it’s one of mine. A very bad painting unfortunately, but unmistakably mine…”

And he added words that were to have a decisive influence on Planque coming from a man who had a reputation for being uncompromising with amateurs: “Well, boy, you have an eye; you certainly have an eye.” A phrase that the collector was later to repeat endlessly and that was to be crucial in his choice of career for the art scout he was to become a few years later when he began working for the Galerie Beyeler. Planque had made the conquest of the ageing painter, who enjoyed discussing painting with him, in particular their common god, Cézanne, and his example. Planque had a deep veneration for Auberjonois’ work in spite of Dubuffet who, with his customary brutality, dismissed it as “nothing. He has no inventiveness. And invention is the only thing that counts.” But Planque remained unfazed and wrote in his diary that “Auberjonois has left us an intensely human oeuvre. In a few of his canvases he succeeds in imparting feelings akin to those of the late Rembrandt… As long as there are people who give themselves the trouble to look attentively, it’s an oeuvre that will always find passionate admirers and equally passionate detractors. Auberjonois reaches up to the heights, those reserved for exceptional minds.” 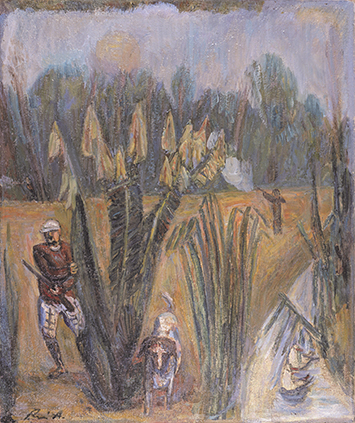