The latter bought the canvas from the Moos gallery in Geneva the year that the Basel artist painted it, and at a price the young commercial employee he was then could afford: 400 Swiss francs, which he paid in two installments. Planque was impressed by the composition’s solidness, which reminded him of Cézanne whose influence was paramount to him at the time. He never parted from this painting, which he loved not only for the way its plans are staggered so that the viewer’s gaze can come and go at leisure in the pictorial space but also and above all for the ease with which the artist positions the nude in the light washing in from the right, modeling the young woman’s body sensually. Some years later Planque had the opportunity to meet the already aged painter through his friendship with Walter Schüpfer. Barth had worked at times in Paris, notably in Matisse’s and Marquet’s entourage. His accounts of life there may have inspired Planque to visit the French capital as well. 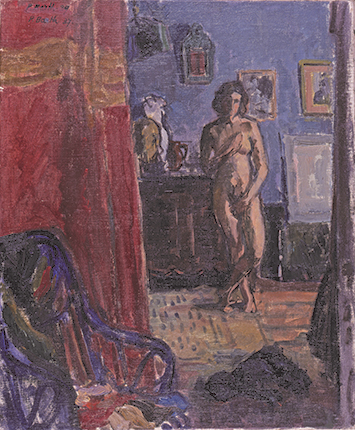