Originally from the Swiss canton of Solothurn, the socially modest Berger family was obliged to move to Geneva in 1896, where the future artist’s father, a clockmaker, managed to find work. From 1899 to 1902 the young Berger apprenticed in an architect’s office while taking drawing classes at the local school of fine arts. In 1907, some five years after his first visit to Paris, he decided to devote himself full-time to painting. Fascinated by the works of Van Gogh and Gauguin he sojourned in Brittany and Provence. His progress were so fast that, encouarged by Ferdinand Hodler, he got in 1911 a big personal exhibition at the Musée Rath, Geneva. From 1924 until his death, Berger lived at Aire-la-Ville, a village in the countryside near Geneva, where Jean Planque visited him several times after having met him around 1955. Despite their ages difference, the tone of their exchanges quickly became familiar : both expressed their common admiration for Cézanne and Van Gogh. 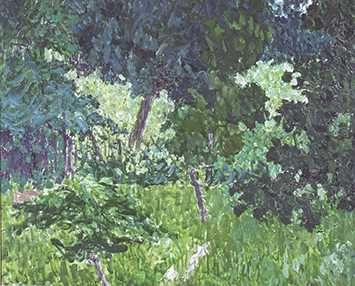