Jean Planque met Picasso for the first time on the fifth of July 1960, the day he turned fifty. Dispatched by the Galerie Beyeler, he called on the artist at his villa, La Californie, with a Cézanne under his arm, a heavily restored canvas he knew the master wasn’t going to buy – as was the case in fact. However, taking advantage of this opportunity, the extremely shy collector marshaled all his eloquence to show Picasso how much painting meant to him. The artist was delighted with Planque’s sincerity and the profundity of his words. He suggested that he visit him again and even summoned him subsequently to give his opinion about certain canvases he had doubts about. This was the beginning of a friendship that enabled the Galerie Beyeler several years later to buy some twenty-five canvases directly from the artist, destined for an anniversary exhibition at Basel. In 1971, Planque was given the task of negotiating the exchange of the famous Guitar on cardboard that the New York MoMA wanted. In the eyes of the collector, Picasso was the embodiment of the artist capable of reinventing an absolutely new language while respecting the tradition of painting. All of the Picassos in the collection were acquired in the years when the two men saw each other. 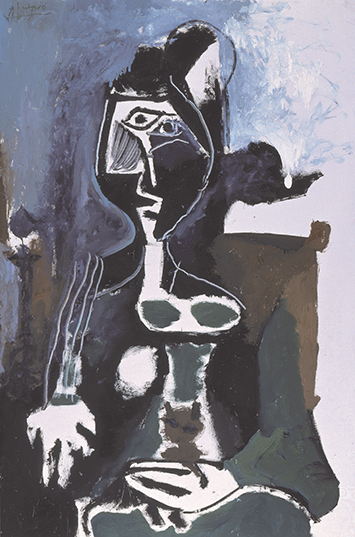 Pencil and pastel on cardboard