At the very outset of their collaboration, Jean Planque mentioned Mark Tobey’s work to Ernst Beyeler. At the time only a few art enthusiasts in Europe were even aware of the American painter. In 1956, Planque again urged Beyeler, who was leaving on a business trip to New York, to visit the artist’s studio. The gallery director returned with some forty Tobey canvases. Planque’s interest in Tobey’s art was guided by the same impulse, the same curiosity as the one that was to draw him to Dubuffet’s Texturologies. He discerned in the subtle structural variations and experiments with texture of both artists an evocation of the infinite spaces that contemporary astronomy was then revealing to the world. It is surprising, however, that Planque never bought a larger canvas by the artist, despite his easy, frequent contacts with him and his admiration for a painter he regarded as one of the most cultivated and attentive creators of his era. 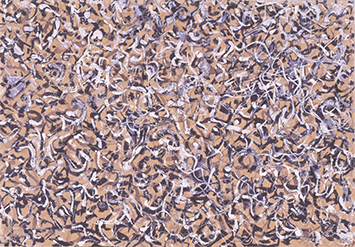 Ink, gouache, and gold paint on a yellowed spoil sheet