Planque met Kerkam in 1951 at la Grande Chaumière in Paris where, on returning from his sojourn near Aix-en-Provence, he felt a need to relearn how to draw. He was fascinated by the fact that Kerkam was so completely dedicated to his art that he paid no attention to his personal comfort or to his physical appearance. What impressed the collector most was the sureness of Kerkam’s draftsmanship, the way he was able to outline a figure in clear-cut, rapid strokes that he reworked only seldom. On one occasion, as the American artist and Planque were working together, Kerkam paid his friend a somewhat backhanded compliment that Planque never forgot: “You’re the best eye I’ve ever met, but a terrible painter.” Now the man Planque regarded as a total unknown was in fact far from being a nobody: after he died a number of his friends, among them Willem De Kooning, Philip Guston, Mark Rothko, and Esteban Vicente, wrote to the New York MoMA to request that the museum hold a retrospective of his work, declaring that Kerkam was “one of the major artists yet to be discovered in the United States.” The fact that Planque was totally ignorant of the career of this painter who was already widely respected in his own country, and spoke of him as if he were an inspired tramp, is significant. Painting was an absolute for both men, and all the rest – appearances, fame, fortune – was immaterial. 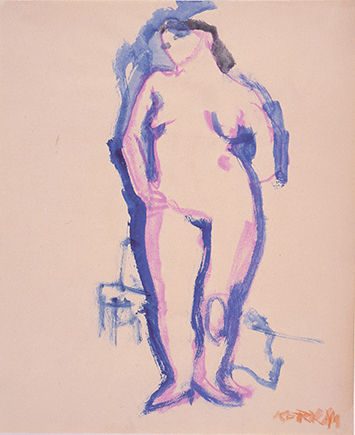