At 18 Jean Planque, still a student in Lausanne, screwed up his courage to enter an art gallery: “Feeling bold one day I opened the door of the Galerie Valloton at Grand-Chêne — I had been looking at the paintings there every time I passed in front of the place – and enquired about the price of a fairly large painting, wide as anything, roses that were so beautiful, so desirable, that I wanted passionately to live in its presence. 3600 francs, came the reply. It was a painting by Renoir and this was certainly the first time I had heard that name” (Jean Plaque, Diary, August 1973). Two decades later the collector bought several Renoirs for the Tanner gallery in Zurich and with his commission acquired the red chalk drawing Young Woman with a Beret. He prized the zest, the depiction of life as something good and beautiful filled with flowers, fleshy women, and light. He saw Renoir as a vital link between contemporary painting and the art of the past. 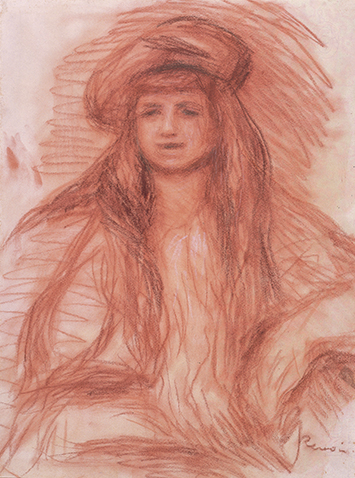