Planque was immediately drawn to the painter’s unaffected manner. In his work for Galerie Beyeler he was able to do much to promote Léger’s oeuvre, thanks in part to the early interest of the city of Basel, its collectors and museums, for the French artist. The Rose and the Compass was painted in the middle of the so-called “Purist” period when Amédée Ozenfant and Le Corbusier (the movement’s founders), Leger focused on simplifying forms and produced still lifes in which depth is replaced by magnifying objects and their context. In the present composition all feeling extraneous to the simple visual fact has seemingly been banished, with the result that what is brought into play is the beauty of meticulously worked forms and planes of pure color. Yet there is something profoundly lyrical about this pairing of the stylized, sharply silhouetted, disproportionately large objects. The visual rhyme of the rose and the compass could not have been better suited to Jean Planque, who was forever being drawn to combinations of natural beauty and expressive rigor. 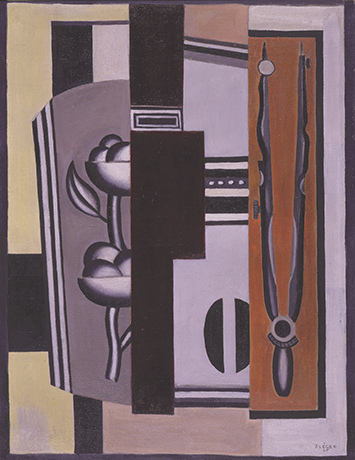