Jean Planque discovered Maria Elena Vieira da Silva’s work at the Galerie Jeanne Bucher in Paris, where the artist had been signed up before the war and where she continued to be treated generously after her return from Brazil. Planque was close to Jeanne Bucher‘s successor, Jean-François Jaeger. The nature of his collection distinctly reflects their friendship struck up in the early 50s. In front of works by supremely demanding artists possessing exemplary integrity – artists committed to a rigorous and unrelenting quest for their own truth, and with whom they developed bonds of trust and loyal friendship – Planque and Jaeger sought to find the answers to their own questing and questioning. “I am convinced that Nicolas de Staël, Manessier, Bazaine, Vieira da Silva express powerfully, with originality and through painterly means, the genuinely human emotions that are the emotions of our time” (Jean Planque to René Auberjonois, shortly before the latter’s death at Lausanne in 1957). 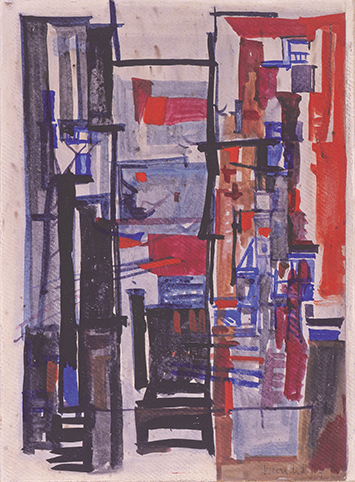 Wash and gouache on paper mounted on rough canvas