Jean Planque contributed to getting Monet’s late painting, long viewed as being second-rate or the product of a painter whose eyesight had deteriorated, widely recognized. He managed to persuade the painter’s son Michel to make public the artist’s revolutionary work, which marked the history of abstract painting in Paris in the 1950s. Years later, after rediscovering the group of Monet paintings bequeathed to the Musée Marmottan, the fervor of his response was undiminished: “During that visit to Marmottan a few weeks ago, I experienced the same huge, tumultuous emotions, and felt annihilated when I left the place… Colors crisscrossing, overlapping, slipping from over to under, in all their variety, their richness, what a lesson! One can really form a precise idea there of the importance of that work and its ‘novelty’” (Jean Planque, Diaries, November 1973). The two canvases in the Planque Collection, both pushed to the very limit of representational art, were given to Planque by Michel Monet to thank him for his guidance. 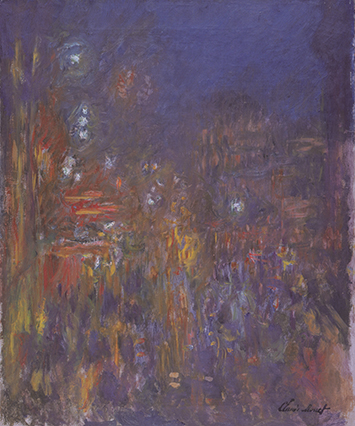