The presence of a watercolor by Henri Michaux in the Planque Collection is hardly surprising, given the collector’s abiding interest in art characterized by visual “writing,” as in the works of, among others, Klee, Hantaï, Dubuffet, and Tobey. In this splendid watercolor Michaux, the draftsman poet, lets himself be guided by effects that appear almost fortuitously on the sheet of paper, accepting these accidents on faith, in blind trust, so to speak, so to allow himself to be surprised by the consequences of his own minimal gestures. Jean Planque had a great deal of respect for the artist’s stance of letting things happen; this was an attitude he regularly claimed to cultivate in his own perception of artworks. He would declare that he always made an effort not to require of an image that it be comforting or that it confirm something he already knew. He wanted art to offer a spectacle that was at once novel and durable, one that speaks exclusively to the eyes, at the expense of intelligence or memory. 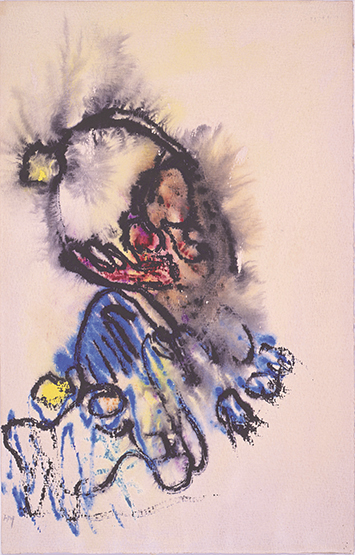