Jean Planque discovered Antoni Tapiès’ work in 1950 at an exhibition of young Spanish artists at the Musée d’Art et d’Histoire in Geneva. “Nothing struck me except one painting that fascinated me. Some years later when I was working for Beyeler I was walking down Rue de Seine [in Paris] and in the window of [the Galerie] Stadler there was a painting that reminded me instantly of the one I had seen in Geneva. I knew and felt the same emotion, the same fascination. I went in. And that show which had been running for some time was having no success. We bought about twenty paintings by the artist” (Jean Planque, Diary, 7 November 1973). Over the years, the Galerie Beyeler was to acquire many more paintings by Antoni Tapiès. Despite his early attraction to Tapiès’ work, Planque did not subscribe to his later paintings: in his opinion, they did not have the austerity that had first drawn him to those canvases where matter combines with color to light an intense, muted blaze. 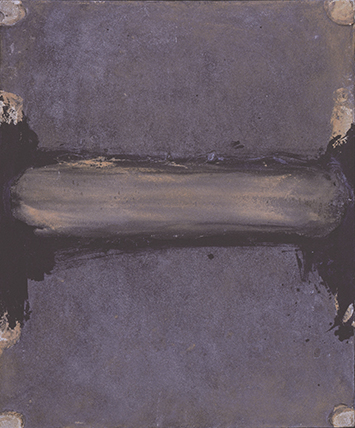 Gray with a Lighter Horizontal Strip, 1960

Paint mixed with sand on canvas