Born in Iaşi, Romania, in 1933, immigrated to Israel, where in 1953 he studied at the Institute of Painting and Sculpture in Tel Aviv. His first solo exhibition in Tel Aviv in 1958 earned him a scholarship at the Brooklyn Museum of Art in New York City. In 1959, a meeting with Toronto art collector Samuel Zacks led to Etrog’s first Canadian solo exhibition, at Gallery Moos in Toronto. Leaving New York for Toronto in 1963, Etrog became a Canadian citizen. Etrog is also known for his writings and published plays, poetry and non-fiction. Artist Sorel Etrog’s life and work embraced the complexities and contradictions that make us human. The eminent Canadian philosopher and educator Marshall McLuhan, one of Mr. Etrog’s many notable collaborators, wrote of the artist, “His work is always multi-levelled and multi-sensuous in ways that are not easily described in conventional literary terminology.” 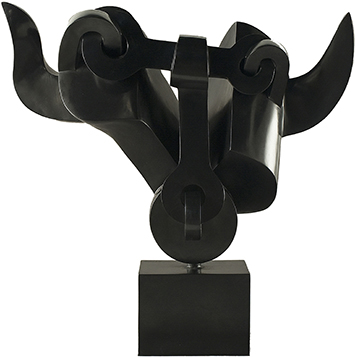