“We organized, Beyeler and I, a Robert Delaunay show around ’66-‘68. With no success. Sonia had lent us everything we wanted. It was on the occasion of this exhibition that, to thank me for all the trouble I had gone to, she gave me the Eiffel Tower I still own and that was used to make the poster for the Basel show. A gouache on cardboard, very beautiful” (Jean Planque, Diary, September 1973). The work is from the second series of Eiffel Towers which the artist painted after 1924. One of the wonders of the modern world and an epitome of urban vitality, the Eiffel Tower oriented Delaunay’s vision throughout his career as a painter. Whether viewed from an airplane, with the flowerbeds of the Champ-de-Mars fanning out at its feet, is fragmented to fit between two buildings in a space framed by a window, or is captured in a dramatic low-angle shot, as is the case here, the metal spire distributes color and imparts a dynamic feeling to space, challenging the laws of gravity on canvas much as it does in the heart of Paris. 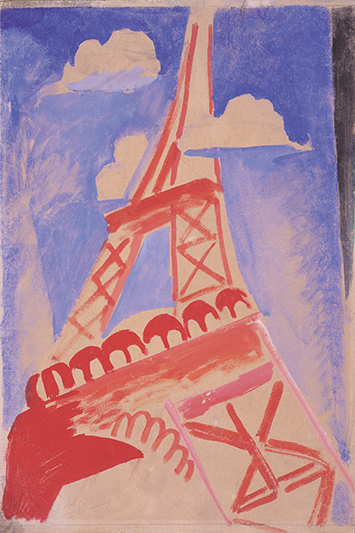 Gouache on paper mounted on cardboard