In the two small canvases by Fermin Aguayo, which the collector bought from the Galerie Jeanne Bucher in the late 50s, there isn’t a trace of any literary or illusionist effect; we are immediately pulled into the vibration produced by their pictorial components and by the manner in which they are orchestrated. Our eye is immediately propelled into the spectacle unfolding before us. No crutches to help us, no signposts. No actual beginning or definite ending. Plunging into the nameless work, in a state of blind freedom – almost exiled in it – we manage by dint of vigilance, of relinquishing and questioning, to swim back to the surface as we make out a structure here, a physical quality there; weaving together the connections between certain colors, certain orientations suggested by the artist’s implements; impelled, too, by the rhythms that imperceptibly animate the texture thickening and becoming increasingly rich and elaborate under the action of our gaze. 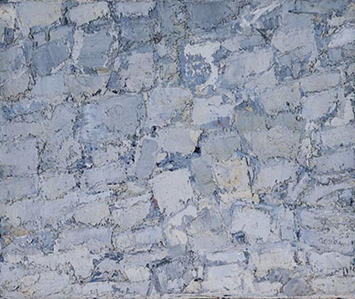