For Jean Planque, his meeting Jean Dubuffet was the most rewarding encounter of his life. « Dubuffet approached the poor fellow I am. I owe him everything I was later able to do. Everything. He gave me the keys to analyze an artwork. Taught me to look” wrote Jean Planque in his Notebook of 1996. The first time he spoke with him in 1956 in a café in Montparnasse in the company of Ernst Beyeler, the artist’s remarkable intelligence and caustic wit made him feel slightly uncomfortable. In spite of his instinctive cautiousness, Planque soon found himself at the hub of Dubuffet’s complex, fragile relationship with his dealers. But the first thing that Planque envied Dubuffet was his passionate, truly inexhaustible will to create, which, he complained on a number of occasions, he himself lacked altogether: “In all my encounters with Dubuffet, the thing I admired the most about the man is that unfaltering drive to produce. Pictures. Writings. Letters. Everything was organized. Everything was quickly followed up. Every moment was filled. » The corpus of Dubuffet paintings that Jean Planque kept right up to the end of his life is the best testimony to the remarkable rapport between the two men. With the exception of two or three pieces that were gifts from the artist, and later from his daughter Mina, they date back to the period when he and Planque were working together. They thus reflect an aesthetic choice; and they bear witness to a friendship that was crucial to the collector. 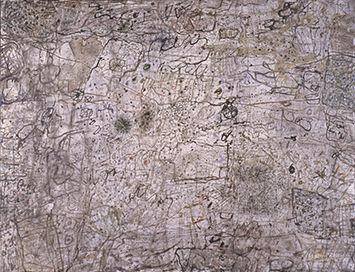 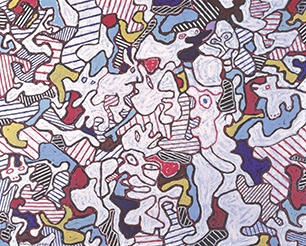