Jean Planque had mixed feelings about Vallotton’s painting. He admired the tension in his fellow Vaudois’s cruel, uncompromising images wrought with an extraordinary technical mastery. “That this artist who lived all his life in Paris close to the Nabis should have remained so uncompromising, so purely himself, without in any way being marked by the other painters he associated with and lived among, is extraordinary and denotes a character of a rare magnitude, a vocation pursued totally throughout his existence,” he wrote in 1972. Two years later, after visiting an exhibition devoted to the artist at Museum of Fine Arts in Winterthur, Planque specified that what he preferred in Vallotton’s work were the landscapes painted in 1900-1905 near Paris and on the banks of the river Seine. Thus he judged that the painting that Beyeler gave him in 1956 to thank him for having helped in the sale of a major Matisse to the New York MoMA belonged to the artist’s best period. 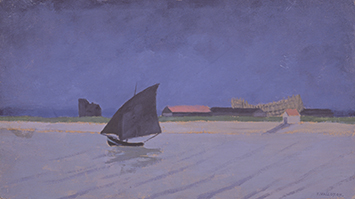