In spite of the fact that all references to the external world vanished from his work after 1943 Nicholas de Staël was never inclined to regard himself as an abstract artist. On the contrary, he asserted with deep conviction his allegiance to figurative painting, but to a figurativeness that was poetic rather than mimetic; one that proclaimed itself in the very act of painting. Jean Planque never made a distinction in his mind between the painter’s early period and his subsequent output. He understood the continuity of de Stael’s work perfectly, believing that, as the artist wrote, “You do not paint what you see or think you see… You paint a thousand vibrations away from what strikes you.” Jean Planque accompanied Nicolas de Staël’s oeuvre over the years, notably by organizing several exhibitions for the artist at the Galerie Beyeler. He was particularly impressed by de Stael’s temperament and by the fact that the painter did not reject the art of the past, but sought to construct a new language from its bases. 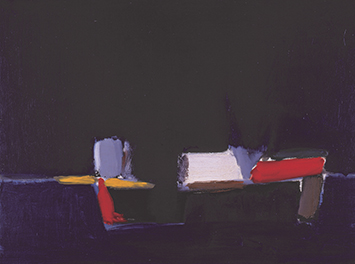