In Planque’s eyes, Jean Bazaine belonged to the family of painters who had succeeded in assimilating Cézanne’s legacy, especially the Cézanne of the late watercolors “which consist only of spots of color… those luminous miracles which evoke, suggest, oblige the viewer to go further, to continue the seemingly unfinished work.”

He valued the weightiness of his work, an oeuvre that never attempts to shirk its commitment to facing the unknown. There is nothing falsely seductive about this painter whose quest for a sudden pictorial revelation never yielded to a facile technique or hasty illumination. His interpretation of landscapes as a succession of singularly taut, pared down abstract shapes gains coherence in the seemingly spontaneous organization of colors on the surface of the canvas. The artist delves into visible reality in search of the elementary: the fluidity and transparence of water translated into the crystalline structure of a watercolor unfolding its single blue harmony; rich earth, dense shadows, opaque skies in his oils, for example the small 1954 canvas Spain, which Planque was particularly fond of. 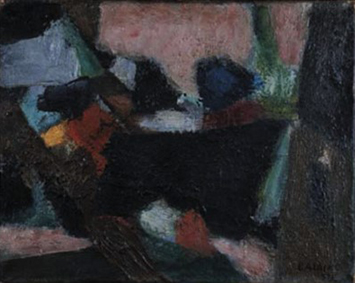