Planque could not have avoided running into Lelo Fiaux in the streets of Lausanne during the war. She was a gifted painter and colorful figure. When World War II broke out in 1939 she was obliged to return to the country of her birth after having been briefly married to an American, having moved to Rome shortly afterwards where she had had an affair with the writer Alberto Moravia, and then, unattached, having made numerous trips to Greece, Morocco, Tahiti. Was it René Auberjonois – an acquaintance of both at the time – who introduced Planque to Lélo Fiaux, or his then neighbor Charles-Albert Cingria? What is certain is that, despite temperamental differences, the collector and the painter were at once drawn to each other; Planque was captivated by the uninhibited artist’s fancifulness. In time, bearing witness to their mutual trust, he boldly returned an old painting of hers he no longer liked, exchanging it for the Liberté shown here, which is still in his collection. In addition, the generous Fiaux gave him four of her watercolors. 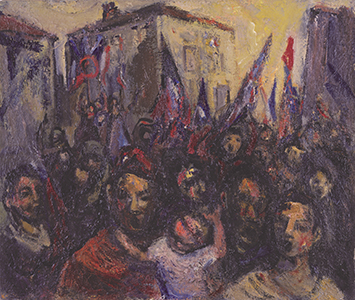