Among Jean Plaque’s preferences the figure of Cézanne unquestionably comes first. He was the first artist to have taught him to view painting as a separate, autonomous language, the twin fruit of visual perception and expression. Planque very quickly understood that Cézanne’s great lesson is that he experienced the revolution which was to affect the destiny of all future painting as a daily struggle. The human dimension of Cézanne’s adventure became a life model in the eyes of the young Planque, who devoured his fellow Vaudois C. F. Ramuz’ L’example de Cézanne published in 1916. He was so deeply impressed by Cézanne that immediately after the war he decided to settle at the foot of the Montagne Sainte-Victoire to try his hand at an artist career’s in the special light of that region. For four years he lived in a hermitage near Aix-en-Provence studying the master’s paintings and writings. One of his very first acquisitions after he began to earn a living was a Cézanne watercolor; later, when he worked for Ernst Beyeler’s gallery, he was forever on the lookout for works by Cézanne. It was thanks to Cézanne that he had the opportunity to meet Picasso on his fiftieth birthday: visiting the latter to show him a painting for sale, Planque succeeded, thanks to his eloquence during the ensuing conversation, in earning the unforeseen privilege of becoming a friend and confidant of the ageing artist. Finally, in 2010 it was Cézanne who inspired the members of the Planque foundation to deposit that institution’s collection at the Musée Granet in Aix-en-Provence, in a sense crowning an entire life dedicated to admiration for that artist. 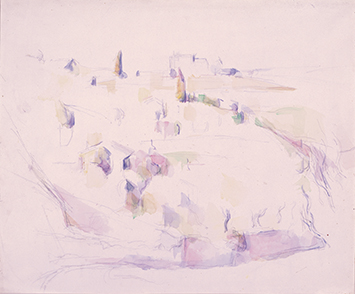 Watercolor and graphite on vellum paper