“Ubac has a horror of anything that glitters.” This observation by the writer and art critic Georges Limbour in an essay devoted to the artist in the May 1957 issue of L’Oeil magazine, could serve equally well to describe Jean Planque’s ethical and aesthetic choices. The collector’s attachment to the rural values of depth, patience, and frugality led him instinctively to works that express these virtues visually. The powerful, weighty, thoroughly meditated forms that build up the composition of Trap I evoke fields enclosed by hedges, the ditches that bound them, the hard labor of working the earth and getting it to bear crops. Above the level surface, great slabs of stone, buried lanes, furrows, we perceive the outlines of an implement that might be a trap for wild animals or a primitive plough – an instrument as vital to a farmer transforming the glebe into wheat as to an artist exhuming the cold fire of light from the mists in his innermost depths. 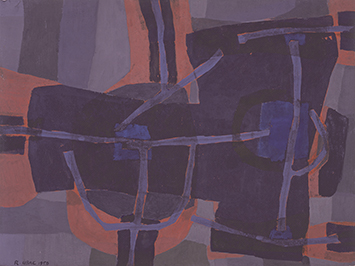