Manolo Millarès was one of the first artists to manhandle the actual canvas on which he worked, slashing it, burdening it with humble, incongruous materials to express the wretchedness of an impoverished soil, a human revolt. In Millarès’ work Planque instantly recognized the bedrock of primitivism that Spanish artists like Antoni Tapiès or South Americans like Francisco Toledo – both present in his collection – tapped more convincingly than northern European painters. The collector was especially fond of Millarès’ Black Composition, with the exemplary sobriety of its technical means and its celebration of clashing elemental forces. He liked the depth of its inky darkness brimming with slow, inexpressible mysteries and the way it is scarred by a jagged, energetic line beautifully rendered in wash. Time and again, he was struck by the interaction of the opposing forces seeking a point of equilibrium between verticality and horizontality, speed and depth, transparency and opacity, light and darkness. The radical character of the struggle played out on the canvas only increased the pleasure he got from contemplating this painting. 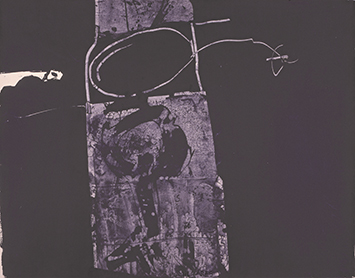