It was the luminousness of La Fresnaye’s palette and his Cézannian feel for equilibrium that drew Jean Planque to this artist’s paintings. The unusual thing about this landscape is the fact that it was painted on both sides of the canvas. The artist did the first version on a sizing that enhances the brightness of the colors, though it imparts a more confused perception of the bridge across the Seine in the village of Meulan. A comparison between the two versions shows that the artist was moving toward a more tranquil and compact articulation of architecture. Roger de La Fresnaye subscribed cautiously to the Cubist revolution: he felt that painting ought not to totally jettison direct observation from life. Though he accepted the notion of constructing a painting from simplified planes, he was never entirely willing to forego the pleasure of depicting the transitions of light and its motion in space. 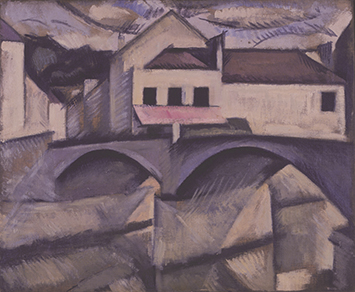 Oil on canvas, painted on both sides