Planque regarded Klee’s work, which he discovered in Basel in 1930 or thereabouts, as one of the peaks of twentieth-century art insofar as it was capable, in his eyes, of transcending the individual ego and the drama of history in a language that was unique, modest, far from authoritarian; it had a magic that charms and connects. Klee stands at the summit of Western culture, he wrote; he has assimilated everything yet manages to communicate with his contemporaries without rebelling or putting into question the tradition he springs from. The collector felt that these traits make Klee, so to speak, the polar opposite of Dubuffet – though he liked to point out that he was one of the few painters who found favor with the latter. In his daily work in his small La Sarraz studio, which he often referred to as his “keyboard exercises,” Planque frequently borrowed from Klee’s pictorial universe – his colors, his skillful handling of transitions and rhythms, his manner of organizing the picture surface into small, vibrant geometrical components, his collages and transparent effects. 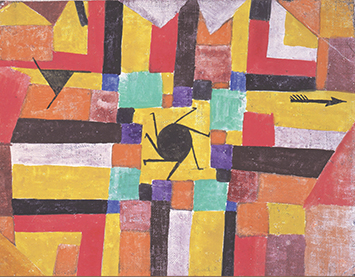 Gouache and tempera on canvas