Coghuf was born in 1905 near Basel, Switerland, under the name Ernst Stocker. Probably to differentiate himself from his older brother, Hans Stocker, also a painter, he began to use the pseudonym Coghuf at the are of twenty. Initially an apprentice locksmith, he subsequently moved to Paris and trained as a sculptor with Jacques Lipchitz. He then soon took up painting. On returning to Basel he joined the Rot-Blau group united by its admiration for Ludwig Kirchner, and before long he was carrying on his own research. He made several trips to southern Europe before settling in the Franches-Montagnes district of the Swiss Jura in 1934. By the late 1950s, Coghuf moved on from painting landscapes, watercolors and murals to working in stained-glass, along with artists like Jean Bazaine, Roger Bissière, Alfred Manessier, all of whom were active in French-speaking Switzerland in that period. The artist dedicated this small painting to Jean Planque when the two of them were frequenting Walter Schüpfer’s circle in Basel. A rather uncharacteristic study for Coghuf, it is the only work by the Swiss artist in the Planque collection. 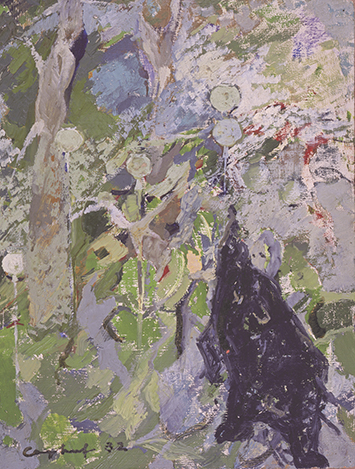 Oil on a light wood panel