Augusto Giacometti has been hailed a “precursor of Tachisme,” even the “pioneer of abstract painting”; indeed his first experiments go back to 1899 to a pastel inspired by a stained-glass window in the medieval collection of the Cluny Museum in Paris. At this point in art history, the Swiss artist could in truth be viewed as a non-representational painter before his time. As for Jean Planque, very early on he compared his visual perception of paintings to the abstraction of music. He understood that illusionism has nothing to do with the profound emotions he experienced in front of a picture and that his sensibility was far more receptive to hidden affinities between form and color, the rhythms and contrasts that create depth. He liked to state that in front of a picture one must be able to discern relationships impossible to express in words or ideas, much as one apprehends the invisible in music. The floor in the artist’s studio inspired the motif of this small pastel, which was a gift from Ernst Beyeler: a miniature piece but an important and precious one that delighted Planque. 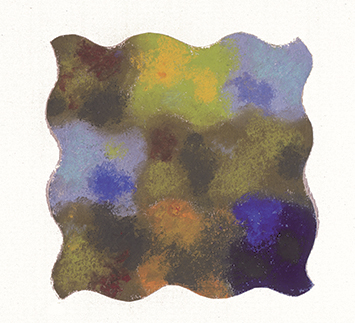