Although he never attempted to become personally acquainted Louis Soutter, who he could easily have run into in Lausanne in the late 1930s, Planque had a great admiration and deep respect for his work. He even preferred it to Dubuffet’s art because of its total, absolutely sincere commitment to the artistic adventure “Soutter,” he wrote in his Diary, “[is] entirely heartbreak and human suffering, [he] moves us to the quick, in our despair and future death; like Van Gogh he attains an extreme grandeur and rises far higher than Dubuffet was ever able to reach, for the latter’s intellect questions and puts up screens. The latter drives himself forward, raises himself up, strives to attain the pinnacle. Dubuffet possesses none his [Soutter’s] riches. He contrives, amuses himself, creates, in series [of] ten, twenty, or more, as he pleases and as much as he pleases. Soutter has only his distress for company, his growing solitude, and attains a genuine dramatic peak that Dubuffet could never reach.” 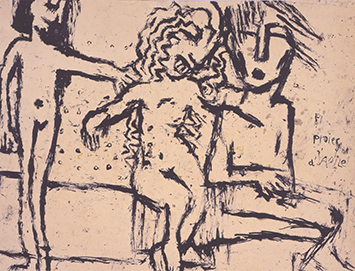 Pen and ink on paper