Planque was less interested in the Symbolist content of Redon’s oeuvre than in the magic of an artist who possessed the mysterious power to extend with a few brushstrokes the horizons of feeling and thought. He refers to him in terms that convey the thrill of surprise and pure physical pleasure: “Redon is glorious… He transports us to another world, to an unreality more real than the unreal. Colorful enchantments. Inhabited by a magic as captivating as it is mysterious.” To him, the female face surrendering to indefinite dreams of color in the blue flood washing through space is almost more perceptible to the ear than to the eye. Touches of gold echo here, seemingly convened by a mysterious, hitherto unheard of law of unconscious contrasts released by the monochrome background. In his notes Planque refers repeatedly to the action of the color blue on the retina. He observes its dematerializing effect in Cézanne’s work, of course, and in that of Monet and Hodler, Bissière and Nicolas de Staël (whose superb Landscape from the Sea of 1954, with its dark ocean glow, he purchased for his collection); and during one of their last talks, he and Picasso conversed about the virtue of blue. 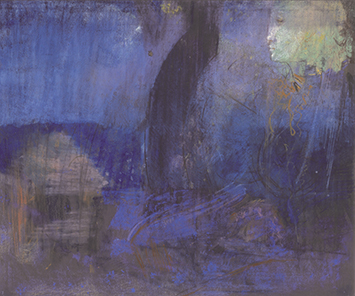 Pastel and pencil on slate-gray paper